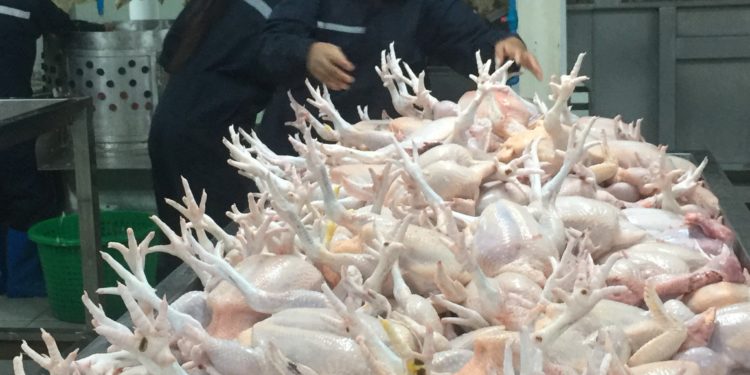 In May 2019 Fresh Studio completed a comprehensive study of the Yangon broiler meat market. This study, the first of its kind in Myanmar, describes the complete value chain for broilers sold in Yangon. The study was undertaken as part of the Sustainable and Affordable Poultry for All (SAPA) project, which began in 2015 and will be implemented until 2020. The study objectives were to map and analyze the broiler meat value chain and market in Yangon, to identify target markets for SAPA-certified farmers, analyze producer constraints, and to provide strategic recommendations to overcome constraints and increase farmers’ access to the urban market. The study was conducted from 2017-2019 and consisted of primary research throughout Yangon and producing regions, complemented by secondary research on the national and international broiler sectors.

The study found that production is led by international firms, whose farms and contract farmers produce 60% of the country’s broilers, while independent farmers produce the remaining 40%. Production has been increasing steadily from 2014-2018, with an annual increase of 3.9% during the period. In 2018, ~168,000,000 broilers were farmed nationwide. Consumption has increased more quickly than demand, rising by as much as 9% per year from 2014-2018. Per capita consumption during this period rose from 4.6 kg to 7.7 kg. The broiler value chain in Myanmar divided between a traditional system of market linkages and an emerging integrated value chain dominated by large foreign firms. The traditional value chain is characterized by an elaborate web of small actors with overlapping and often redundant roles. This system evolved to meet the needs of a broad base of widely spatially distributed retailers and consumers who demand small quantities of fresh birds on a daily basis. In contrast, the emerging market linkages are highly streamlined and serve the city’s growing network of large modern retailers, restaurant chains, and international hotels. This new value chain is positioned to improve food safety in the broiler sector as modern slaughter facilities and cold chains become more widely available. Despite the demand growth in Yangon and changes taking place in the value chain, farming methods and farm-gate prices have been stagnant for the last few years. Low-efficiency farming techniques typically lead to high bird mortality and high production costs, which squeeze farmers’ margins. At the farm gate, broilers rarely fetch more than 1.50 USD/kg, and net profit rarely exceeds ~0.30 USD/kg. At these profit levels, external shocks, such as unseasonably hot weather or a disease outbreak, are devastating to independent farmers.

The study found that two key interventions are needed to strengthen the value chain in order to improve farming practices and enhance the quality and safety of broilers that are delivered to consumers. These are the development of a cold chain and modern slaughter system that independent SAPA farmers can access, and a marketing campaign to raise consumer awareness of the high quality and safety of SAPA chicken.